What do I do with all these tomatillos? 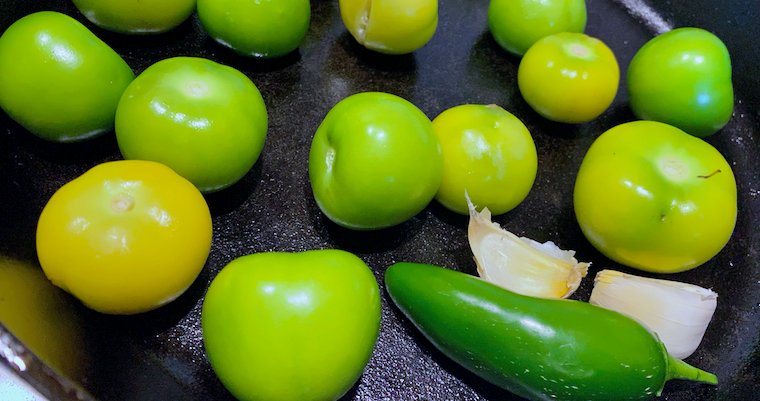 Last November, after our two-person pandemic-constricted Thanksgiving dinner, I ended up with a whole lot of leftover turkey. What to do? One solution was turkey molé, a rich and complex sauce that blends spicy chiles with nuts, chocolate and dried fruit. The recipe I found called for tomatillos, which were impossible to find at the grocery store in November. I just made the molé without tomatillos; it came out great although lacking some zing. Tomatillos would have fixed that. I made plans to be prepared and grow my own tomatillos next year. Which I did.

Here’s the thing about tomatillo plants: they’re prolific. Before I knew it, the plant was branching out every which way, crawling across the ground and strangling other plants nearby. The branches were weighed down with little green tomatillos, which are covered with a papery husk. They’re called “husk tomato” in some regions.

Tomatillos originated in Mexico, and have been used in Central American cuisine for centuries. They have that tangy flavor, which was missing from my molé recipe. Nutritionally tomatillos are similar to their cousin red tomatoes:

Tomatillos aren’t great to eat on their own. I don’t envision BLT sandwiches with tomatillos instead of tomatoes. And like all fresh produce, they won’t keep indefinitely.

Canning cooked tomatillos is one option. I made some green salsa by dry roasting tomatillos with jalapeño and unpeeled garlic in a hot pan (see photo above). Remove the jalapeño and garlic after about 10 minutes. Stir the tomatillos around in the hot pan until they’re browned and softened. Cool the vegetables. Peel the garlic and put everything in a blender with cilantro, salt and a squeeze of lime juice. Blend and chill. Use with chips or burritos.

An easy way to pre-cook tomatillos

Husk and rinse 8-10 tomatillos. Peel and chunk up a medium onion. Put the tomatillos and onions in a bowl with 4-6 cloves unpeeled garlic. Toss with olive oil until everything is coated. Put in a roasting pan and cook in a 350o oven for 20-25 minutes until tomatillos are soft. Cool. Cut the stem end off the jalapeño. Peel the garlic cloves.  Puree everything in a food processor or blender. Store in refrigerator or freeze until use.

Black and Green Chili with tomatillos

I improvised a meatless chili recently as a way to use tomatillos. Also as a way to prepare dinner. This chili comes out very soupy, so serve it in a bowl, perhaps over rice, or with tortillas on the side.

Make your life easier by using canned beans. This chili is great on its own, garnished with grated cheese and/or sour cream or Greek style plain yogurt (more protein). You can also add cooked chicken or turkey (4-8 ounces for the whole recipe) and top with chopped fresh tomatoes.

Now that I’ve got a handle on the tomatillo harvest I plan on growing them again next year. I’ll be putting some of the pre-cooked tomatillos in the freezer to add to the post-Thanksgiving turkey molé this November.