Is sucralose sabotaging your diet? 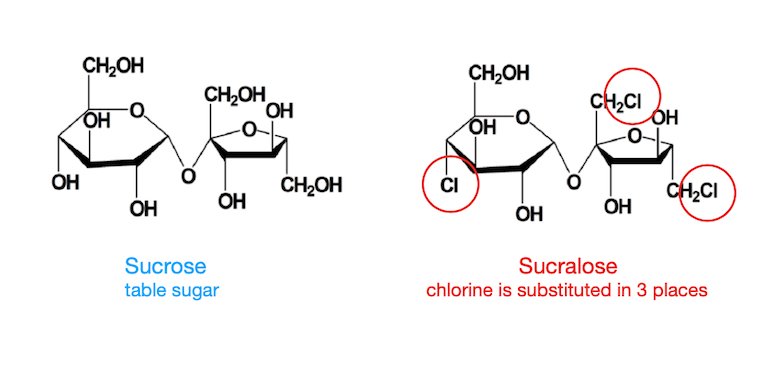 Artificial sweeteners have been around since the 1800s, but use of this stuff in the food supply has accelerated since the late 20th century. There are several chemical forms, such as saccharin, aspartame and stevia. Some are from natural sources, some are cooked up in a lab. Some work well in soft drinks; other forms work better in baked goods.

That’s the point of artificial sweeteners — fooling Mother Nature, otherwise known as Your Metabolism. When your taste buds sense sweetness, your metabolism gets prepared to handle sugars. If no actual sugars show up in your digestive system, then what? No one bothered to think about that. The assumption was that if you replaced 2 cans of soda pop per day (300 calories from sugar) with 2 and of diet soda pop (0 calories), the reduction of calories would create weight loss. Likewise all the other sugar-sweetened foods you might eat, from candy to cookies to ice cream and lattes.

According to the FDA, artificial sweeteners are officially “safe”. Meaning they don’t cause cancer when given to rats in astronomically huge doses. Other health problems aren’t considered. So if anyone attacks artificial sweeteners, the industry always argues that they are “safe”.

A new study about the metabolic effects of sucralose got my attention. Sold as Splenda, sucralose is widely used in the food supply. It was created in the late 1970s by scientists who added chlorine atoms to sugar molecules (see image above). This chlorinated sugar tastes sweet but is not metabolized by humans, so no calories.

But calories might not be the only issue for weight control. These researchers wanted to find out how a sucralose-sweetened beverage affected peoples’ food choices compared to sugar or plain water. MRI scans measured the subjects’ reaction to images of tempting foods. Food choices at a post-study buffet were measured, and lab work checked hunger hormones, insulin, glucose and the like. Measurements were also compared to gender and BMI.

Obese subjects and women reacted strongly to images of tempting foods after drinking a sucralose beverages compared to sugar or water. They also ate more food at the buffet compared to male subjects or normal weight subjects. Obese women were most susceptible to this effect. Men and non-obese subjects were not affected.

In other words, obese women who believe sucralose-sweetened foods and beverages will help with weight control may be defeating the whole purpose. Sucralose may be driving over-eating. The reason for this effect was not explained. Whatever the reason, Mother Nature is not fooled by this fake sweetener.

But: if you’re trying to control your weight by eating artificially sweetened foods, you might want to re-think that strategy.