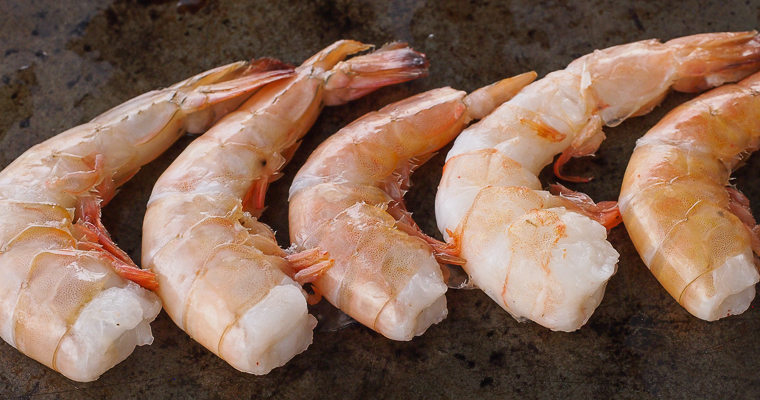 Shrimp would seem to be an ideal ingredient to boost protein intake in a ‘sometimes vegetarian’ diet. Shrimp are:

Drawbacks? Shrimp are expensive, for one. And some people are allergic, or just plain don’t like fish of any kind. Then there’s the shrimp industry, which has been notorious for use of slave labor, particularly in South East Asia. Ocean shrimp trawling is estimated to destroy 4 lbs of bycatch per pound of shrimp harvested (Bycatch = other fish, turtles, etc). !! If true, this would be a good argument for shrimp farming. But shrimp farming is frequently criticized for contamination and disease. What’s a shrimp lover to do?

Here’s another major drawback: breading and frying. Shrimp is a wonderful low calorie protein source. When it’s breaded and/or fried, you end up with many more empty calories. Sometimes it’s hard to find the actual shrimp under all that greasy bread coating. A 3 oz serving of breaded/fried shrimp balloons to 260 calories, 16 grams of fat. 24 grams of carbs and a mere 7 grams of protein. All-You-Can-Eat shrimp might sound like a great bargain, but if the shrimp are tiny and most of the volume is breading and cooking fat, you aren’t getting much of a nutritional bargain.

Given the problems with slave labor and irresponsible or environmentally destructive trawling operations, is it possible to buy shrimp with a clear conscious? The Monterey Bay Aquarium Seafood Watch program publishes a shrimp buying guide that rates different brands, and certifies shrimp caught and processed with good practices.

Furthermore, Instead of simply being critical, the Aquarium has established a program to work with shrimp producers to identify and encourage environmentally and socially responsible production methods. Good news for shrimp lovers.

This is all important, but I’m also concerned about flavor. Inexpensive mass-produced shrimp seems to have no shrimp flavor. The lack of flavor is easily masked by preparation. Fried breaded shrimp tastes like breading and dipping sauce; sautéed shrimp tastes like garlic, lemon and seasonings. Where’s the shrimp? Hopefully sustainable production methods will also yield shrimp that tastes like… shrimp.

I was inspired to discuss shrimp by a recipe I found recently: Shrimp with corn, dill, ouzo and feta (recipe may be behind a paywall). I’m going to try it myself and I’ll revise it as necessary to boost the plant content. The appeal was the list of summer-fresh ingredients like tomatoes, dill and corn, all (soon) available in my garden. So I’m excited for that. Meanwhile I made a super easy summer dinner with fresh corn on the cob, shrimp sautéed briefly in olive oil with minced garlic and a squeeze of lemon juice, and a fresh peach.

Take Away on Shrimp

At the moment, buying shrimp requires some homework, to identify brands and sources that are divorced from slave labor and environmentally destructive practices. In the future, shrimp may be a less conflicted food product. I certainly hope so, because it’s a great addition to a ‘sometimes vegetarian’ diet.