Ins and Outs of Sprouts 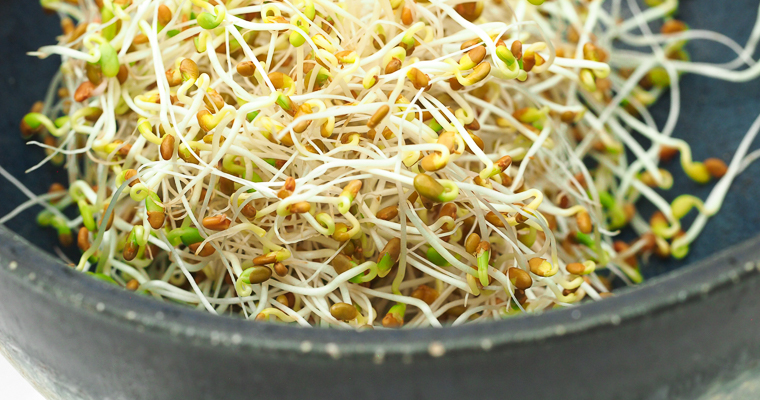 Sprouts used to be a health food “thing”, available at salad bars, at grocery stores and as an optional topping at sandwich shops. Sprouts had an aura of naturalness and health. Crunchy baby plants! Unaffected by pesticides or fertilizers. Organic! I haven’t thought about sprouts for years, and so I was surprised to see an article recently extolling their nutritional virtues.

All plants start with a sprout. A seed germinates and sends out a root and stem. The process is driven by enzymes produced by the seed. If you eat sprouts, you’re eating that just-germinated plant, along with the enzymes. Some people believe the sprout enzymes provide health benefits.

Microgreens, which are sprouts that have matured a bit longer, have distinct green leaves, and may have more of the nutrients we associate with greens, like vitamin A, vitamin K and folate.

Asian recipes frequently include soy or mung bean sprouts added at then end of cooking, or as a garnish. Other than that, I wouldn’t cook sprouts. They’re delightful eaten raw; cooking turns them to mush. There are plenty of ways to use sprouts:

Yes baking. You can buy breads and other items, like flatbreads or crackers, made with sprouted grain. Some people believe they tolerate sprouted grain breads better than regular bread. Keep in mind, there’s no standard definition of “sprouted grain bread”; no minimum sprout content. The more sprouts in the bread, the denser it will be. Commercial bakeries typically use sprouted grains like wheat or rye, not radish or alfalfa sprouts. If you buy sprouted grain bread, pay attention to storage instructions, as you might need to refrigerate the bread.

There are 2 basic ways to use sprouted grain in bread:

The more sprouted grain flour in the bread, the denser it will be. The sprouting and flour-preparation techniques can be tricky, so find a good recipe online if you want to experiment.

Sprouts are the perfect growth medium for bacteria: warm, wet environment and plenty of surface area (every single sprout represents surface area). Sprouts could be contaminated by salmonella, e coli, listeria or other microbes anywhere in the growth and production chain. If contaminated sprouts are mishandled, food borne illness can result. If sprouts are kept too long, quality deteriorates, which can also cause digestive upset.

After so many incidents, many food service companies removed sprouts from their menus. If you like sprouts, you can still find them in grocery stores, or you can sprout your own. Sprouting kits, complete with a seed selection and equipment, are widely available. But keep in mind: sprouting at home doesn’t guarantee safety. You have to follow instructions and safe handling techniques.

Raw sprouts can add a nice crunch and flavor to many foods.

The nutrient content isn’t remarkable compared to other fresh vegetables.

Don’t buy or eat sprouts that look limp or slimy, or smell musty.

If you like bread, sprouted grain bread is an interesting alternative to regular bread.

For more information on sprouts:

Are Sprouts Safe to Eat?

What Are The Health Benefits and Risks of Eating Raw Sprouts

You can find a detailed discussion of baking sprouted grain bread here.