In the land of the Mediterranean Diet 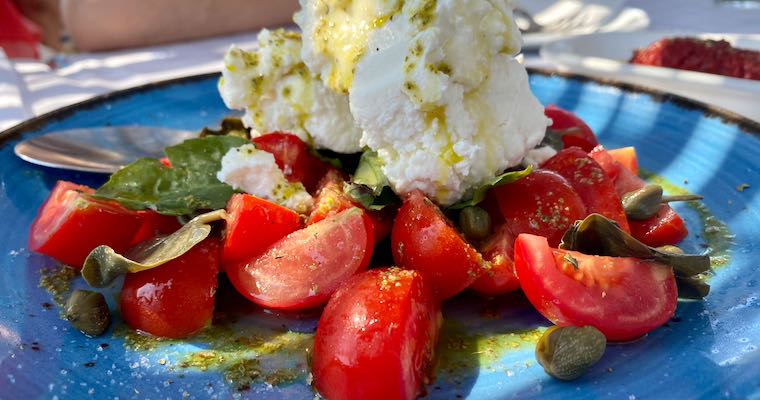 Mmmm. A plate of fresh tomatoes, cucumbers and goat cheese, drizzled with olive oil and herbs, with olives on the side. To me, that’s the quintessential Mediterranean meal. Simple, loaded with vegetables, unprocessed and delicious. You can make that sort of meal anywhere, but somehow it tastes better with the actual Mediterranean Sea nearby.

I recently returned from a trip to Greece, home of the Mediterranean Diet. Or at least Ground Zero for the original research that identified the health benefits of a diet based on local Mediterranean foods. During the 1960’s, Ancel Keys, from the University of Minnesota, conducted the Seven Countries Study, comparing diet and health of groups of men in 7 different countries: USA, Finland, Greece, Italy, Holland, Yugoslavia, Japan and Italy. At the time, health researchers assumed fat intake was linked to heart disease. But in Greece, despite a remarkably high fat intake from olive oil, heart disease rates were lower.

In the land of the Mediterranean diet, fresh foods were the norm. The meals emphasized vegetables, fruit and cheese. Overall, I was surprised at the portions sizes and the general amount of meat being served.

Mediterranean on a plane

I expected to find Mediterranean foods in Greece. I didn’t expect to be offered a Mediterranean entree option on a long distance flight. Buy since the airline had made an effort, I had to try it out. Here’s what it included:

Technically, you could call this Mediterranean. You could also call it vegetarian or plant-based. Maybe not vegan, if the muffin contained egg. What it didn’t have was any dairy or meat, and what it didn’t seem to include was olive oil. So it was an interesting effort. Cheese, meat and fish are part of the classic Mediterranean diet, but this meal was trending vegan. If I had been advising that airline caterer, I would have planned a different Mediterranean meal.

Meanwhile on other long flights, the meal choices were either meat or vegetarian. I chose vegetarian both times. One entree was 2 squares of tofu, breaded and fried on a bed of greens and grains. The other was roasted celery root on a bed of grains, accompanied by a vegetable salad. I was OK with the tofu meal, but I thought celery root made for a strange entrée. The whole meal was vegetables and fruit. No protein.

Despite these oddities, I give the airline a A for effort. I overheard one flight attendant apologizing after they ran out of vegetarian meals on one flight. So the demand is there. The implementation could be improved, even within the constraints of mass-producing airline meals.

Whether you call it Mediterranean or ‘Sometimes Vegetarian’, you don’t have to travel to Greece to eat this type of diet. Base your meals on vegetables, grains and legumes. Add cheese or eggs in modest amounts. Use meat in smaller amounts, or just less frequently. Use olive oil for cooking and dressings. Avoid processed foods and avoid too many sweets. Throw in a glass of wine and some espresso(s) and you’re all set.