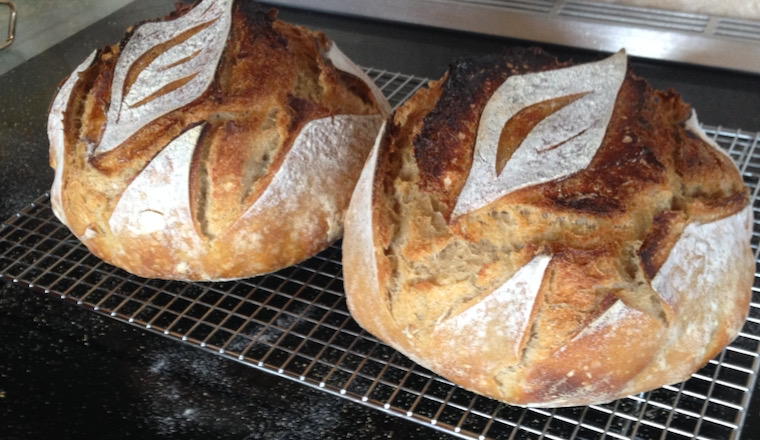 I need a bumper sticker that says “I Brake For Bread”. I love bread. What’s not to like?  It’s delicious and satisfying.  Bread is my go-to breakfast, full of carbs to fuel my mornings.

I’ve been baking bread for 50-some years. My first efforts weren’t always great.  I remember one loaf had so much molasses the slices just flopped over.  And attempts to bake 100% whole wheat resulted in leaden lumps.  But I persisted over the years.  No surprise, when yeast and flour disappeared from grocery stores during the lock down, I panicked. How would I bake bread?  Luckily a well-known local bakery was selling sour dough starter: 1¢ for a dab of starter, maybe a tablespoon, in a little paper condiment cup. I fed the little dab of starter flour and water, went online and learned about baking sourdough bread. Two years later, that sourdough starter is still going strong.

Where did bread come from?

In all my years of bread baking, I occasionally wonder “Who invented bread?” How did bread evolve to the wide variety we have today? Who figured out flour? Who decided to grind up grains into a coarse powder, and mix the powder with water? Who decided to cook that mixture? We marvel at people who invent rockets for space exploration or machines to decode genes, but inventing prehistoric bread from the seeds of wild plants, using nothing but rocks, is equally impressive.

Bread is served with meals around the world, and is a dietary mainstay in many countries. In some places, bread is used as an eating utensil.  If you’ve dipped bread into soup or a sauce, you’ve used bread in that very traditional way.  The nutritional benefits of bread, especially whole grain breads, are unmistakeable:

And I should point out: bread is mostly plant-based and usually vegan, unless it has milk or cheese added. In which case it’s still plant-based, and vegetarian.

As bread making evolved, people used grains that were locally available. Corn was used to make tortilla-like flatbread in the Western Hemisphere, before Europeans arrived. Rice, sorghum and millet were the primary bread ingredients in India and China, while wheat, barley, oats and rye were used in the Middle East and Europe.

Wheat flour is the basis for risen/fermented breads. The yeast or sourdough starter works on gluten, which is a naturally occurring protein in wheat flour. Gluten creates a matrix in the bread dough that provides strength as the dough ferments and rises, allowing the bread to hold its shape while having a light texture. If you’ve ever tried to make loaf bread with rice flour or cornmeal, you know that the resulting bread does not rise or hold its shape very well.

However, you can add some of these different flours, as well as other ingredients, to wheat-flour bread dough. I experiment all the time when making yeast bread (my sourdough bread recipe is less forgiving with non-wheat ingredients). If you’re a bread baker, try some of these additions:

If bread baking has become a fun habit for you, experiment with some of these additions to your basic loaf recipe. You’ll be adding flavor, texture and nutrients, and hopefully will make your bread eating experience more interesting.

Thanks to global events, I’ve been thinking about bread over the past several weeks. Ukraine is a major wheat-exporting country.  Farmers there can’t work their fields.  Global wheat supplies will be seriously disrupted, with most severe impacts on developing countries that depend on wheat imports.  We enjoy pricey artisanal loaves and bagels, or fret about the carbs, but simple bread is a critical part of the daily diet in many countries, and their supply could be in jeopardy.  Bread in its many variations has fueled the growth of human civilization.  It deserves much respect.  Hmm, maybe that’s an idea for a bumper sticker: “Respect Bread”.