Corn: from garden to table 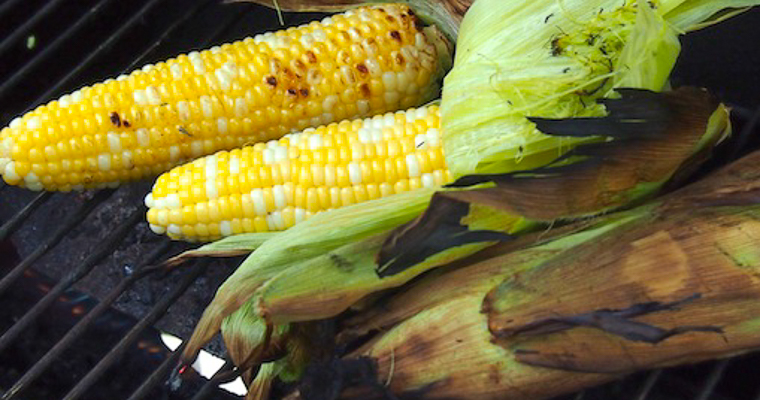 This year I tried growing corn. The plan was to mimic a traditional Native American technique of companion planting: corn + beans + squash. Beans are nitrogen-fixing plants and corn needs nitrogen, so it’s a good combination. We intermingled the corn and pole (climbing) beans in the rows. The squash was planted near by. The hope was that the pole beans would climb on the corn stalks, and squash plants would expand into the lower space around those plants

The squash quickly outgrew its space in all directions, invading the strawberries and jalapenos, threatening the tomatoes. The corn came up but looked stunted. The beans were late to the party, but once they got going the vines climbed the corn and then broke the stalks. So the stunted corn was now also broken.

I managed to retrieve a few of those ears before they were torn off by animals. They looked OK, but didn’t taste that great. Not sweet; kind of starchy and bland-tasting. It was an interesting experiment, but I’m not sure I’ll bother with that again. Beans and squash do great without the mess of smashed and broken corn plants. At least there’s wonderful local corn in the grocery store. The failed gardening experiment didn’t stop me from enjoying fresh summer corn on the cob.

Corn is one of those foods people describe ask “hard to digest”. In fact, corn is hard to chew thoroughly. It’s a bit like the situation with nuts; they have to be chewed up before your digestive system enzymes can extract the nutrients. If they aren’t completely chewed, much of the food passes right on down the line. Nutrients are not absorbed.

It’s hard to get a completely accurate picture of nutrients in an “ear” of corn, since ears vary considerably by size. An average ear (8-9 inches long) yields about 3/4 cup of kernels. Like most vegetables, corn is high carbohydrates and low in fat, provides decent fiber and modest protein. It provides a mix of other vitamins and minerals, notably:

Fresh corn also has various B vitamins, some zinc, lutein and zeaxanthin. An ear might have 7-9 grams of sugar, which is what makes it sweet. My home grown corn definitely didn’t have much sugar.

Corn on the Farm

Corn use is traced back to Mexico and Central America thousands of years ago. Now it is a global crop. Much of global corn production goes to industrial purposes or livestock feed. It accounts for 95% of the feed grain grown in the U.S. Corn is also a source for food additives, industrial chemicals and ethanol, a biofuel which is added to gasoline.

Corn grown for industrial or agricultural uses is typically field corn, not the sweet corn we buy in summer. For example, almost 99% of the corn grown in Nebraska is field corn. The rest is sweet corn for human consumption.

Corn on the Table

Corn is the 3rd largest food crop in the world, and is a staple food in many countries. Corn products are consumed in many different forms:

This is a big variety of foods. Fresh corn on the cob is great, but these other corn products are widely used in everyday foods around the world.

HFCS is a byproduct of corn processing. Corn starch is processed to a syrup that is 100% glucose, a simple one-molecule sugar. This syrup is treated with enzymes to convert some of the glucose to fructose, another simple one-molecule sugar. The resulting syrup is called “high fructose” because it has more fructose than the original syrup. But HFCS fructose content can vary from 42% to 55%, the rest being glucose and water. By comparison, honey is about 50% fructose, so technically we could call it “high fructose honey”. But that would be bad PR.

HFCS is the sweetener of choice for many processed foods, particularly bakery products, cereals, and beverages. By itself, it’s not dangerous; it isn’t metabolized any differently than other sweeteners. The main problem is overconsumption. If you consume lots of sweetened foods everyday, you likely have a high intake of HFCS, as well as other sweeteners. That means lots of empty calories. It means those empty calorie sweetened foods are replacing healthier whole foods in your diet.

Of course, if you’re particularly fearful of HFCS, you’re free to avoid it. It’s always listed on a food product’s ingredient list. But keep in mind, switching to a food that’s sweetened with table sugar or honey or agave doesn’t make those sugar calories any less empty. The best strategy is to limit or avoid sweetened foods in general.

Corn on the cob

I’m all about simple, and what could be more simple than husking an ear of corn, boiling it briefly (don’t overcook it!) and eating it unadorned, so you can appreciate the natural sweetness. Lots of people add butter and salt. You can pre-boil the corn, then rub with butter or oil and finish on a grill. Mexican street corn takes corn on the cob to another level, with butter, Cotija cheese, chili powder and lime juice. If you have leftover cooked corn, slice off the kernels off the cob and add to salads, salsas, soups or casseroles. Or roll them into a burrito with refried beans, cheese and salsa. Yum!