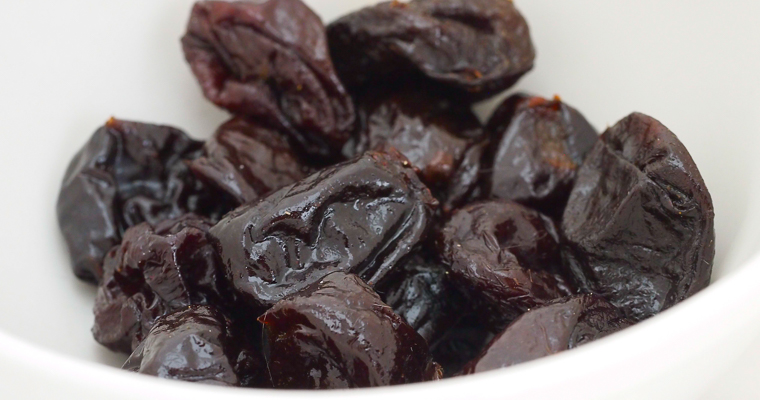 When you think of foods that build strong bones, what comes to mind?

Yes prunes. Not because they’re a significant source of calcium. Instead, prunes provide biologically active substances that support the complex process of bone building.

I was inspired to revisit this topic after reading an article about prunes by a fellow dietitian. Years ago, I wrote about “dried plums”, the official term used by the California Prune Board. The Board was trying to distance their product — prunes, which are dried plums — from the unfortunate negative associations of the actual word “prunes”. As my colleague pointed out, people think of prunes as food for old people (gut health). Or think of old people as dried up “old prunes”. Not great images for marketing to a hip audience.

Now that a large proportion of the food-buying public is older, with older person health concerns, “dried plums” are out. It’s back to prunes. The new slogan is “Prunes. For life.” I’m OK with that. Dried plums are in fact prunes. Get over it. They’re tasty, convenient and healthy. And apparently good for bones, which, along with GI function, is another major concern of aging adults.

How do prunes help bones? There are a lot of theories based on different components of prunes. One theory is that unique compounds in prunes help to reduce inflammation that can lead to bone loss. Other theories involve vitamin K, which plays a role in calcium metabolism. And there’s growing interest in boron, a mineral that isn’t even officially a nutrient, but seems to play what looks like a rather important role in calcium metabolism and bone formation.

Interest in boron as a bone-building nutrient isn’t that new. I found a pretty detailed discussion published in 1994, in which the author references evidence dating back to 1963. That’s 60 years ago. Yet boron has never been considered a nutrient, because scientists haven’t officially looked for and identified symptoms of a boron “deficiency”. This is the kind of thing that makes me crazy. Researchers expect nutrient deficiencies to pop up after a month or two of poor intake, and to involve obvious acute and measurable signs like a rash or crashing blood counts. What if a deficiency symptom was a slow decline in bone density, dragging out over decades? Not sufficiently cut-and-dried? Too many other complicating factors? The better solution to bone loss is an expensive drug?

Boron research is picking up a bit. There are some interesting new studies comparing prune consumption to bone density (such as here and here and here and here). Turns out eating 5-10 prunes a day might be helpful. Maybe it’s the boron, maybe the vitamin K, maybe the anti-inflammatory substances or maybe something else entirely.

Where else can you find boron? Strangely, despite the fact that boron is not officially a nutrient, the NIH Office of Dietary Supplements has a fact sheet on boron. In general, boron is found in plant foods. Prune juice is listed as the best source, so we can assume prunes are also rich in boron. Avocado and peanuts are also good sources. Depending on where you live, you might get some boron from your water.

Speaking of the health concerns of older adults, here’s another tidbit from the NIH:

You might be tempted to buy boron supplements. Keep in mind, since boron is not a nutrient, there’s no regulation about the form or amount of boron in any supplement. And interestingly, multiple vitamin/mineral preparations DO NOT typically contain boron. Because it’s not a nutrient. And because it’s not considered to be a nutrient, there’s no official recommended intake and no official Upper Limit. I think it’s better to just eat some prunes than worry about supplements.

Prunes are pretty easy to incorporate into your day. Eat them as a snack, or with a protein food for a more substantial snack. Add chopped prunes to hot or cold cereal. If you like baking, add chopped prunes to muffins or quick breads. Many cuisines include prunes (and other dried fruit) in savory grain-based dishes.

The Prune Board has recipes, and you can certainly find plenty more on recipe websites. But the best way to eat a meaningful amount of nutrient-rich prunes is to just eat them plain, as a snack, as part of a meal like breakfast, or as dessert after the evening meal.